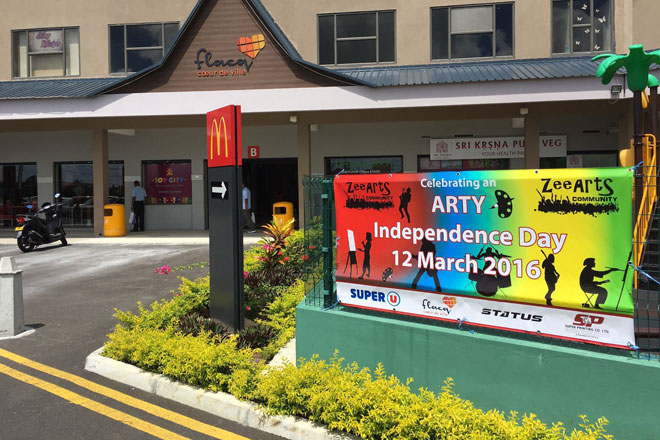 ZeeArts Community- MAURITIUS in collaboration with Super U-Flacq- Flacq Coeur de Ville team up to organize an Arty festival to celebrate the Mauritius Independence Day, where we brought Mauritian artists painters and sculptors from different corner of the island through diverse categories including aspiring children artists, emerging artists and renown Mauritian artists to celebrate the independence day as a first initiative of ZeeArts-Mauritius. The visitors of Super U, took the pride to stop and interact with the artists where they had the opportunity to experience the artists painting live. It was indeed an electrifying day where the artists were buzzing like rain droplet

everywhere at Super U which was indeed transform to an art studio and later on typical Mauritian gallery.

The known history of Mauritius begins with its discovery by Arabs, followed by Europeans and its appearance on maps in the early 16th century. Mauritius was successively colonized by the Dutch, the French and the British, and became independent in 1968. In 2016, Mauritian artists celebrate and pay tribute to the beautiful island by playing with the four Mauritian flag colors (red, blue, yellow and green)

We would like to extend our sincere thanks to all our sponsors, Super U Flacq, Flacq Coeur de Ville, Status and Super Printing for their significant support. Our special thanks to all the participants and the ZeeArts- Mauritius team for making this event a great success.